Without being exactly an obscure white grape variety, Clairette is hardly a world-renowned star either. But a recent visit to a part of Southern France where it has its own tiny appellation dedicated to this sole variety, Clairette du Languedoc (barely over 100 hectares currently planted), showed me its very interesting possibilities in a hot climate, not to mention some very accessible prices for more than decent wines. On the whole I tend to be a little wary of white wines from the south of France, finding them to appear often heavy and overbearing in their alcohol content. But none of this with the Clairettes that I tasted last Thursday when the appellation was celebrating its 30th anniversary.

Clairette is an ancient variety, whose earliest mention on record comes from the Aude department and dates from 1575. It was also mentioned by the famous French agronomist, Olivier de Serres in his treatise of 1600. The word signifies « light in colour », but this could well refer to the leaves which have a downy aspect, since most white grapes are necessarily white in colour. There is a theory about genetic links, and indeed shared identity, with a Spanish variety to be found in Catalonia and called Picapoll Blanco, but this is not the same as the French Piquepoul and it is not either closely linked to the Picardan variety to be found in Provence, as some producers claim. 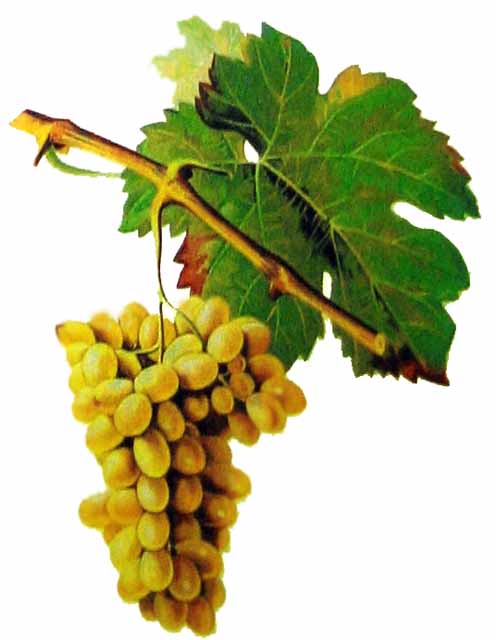 Clairette is well adapted to hot dry climates and can also stand up to wind. It is late ripening and also resistant to many diseases, particularly powdery mildew, which should stand it in good stead this year!  Apart from the Languedoc, southern Rhône and Provence, it can also be found in the Drôme region where is has another appellation named after it: Clairette de Die. Curiously, the sparkling wines of this appellation can only contain a maximum of 25% of Clairette, the rest being necessarily Muscat à Petits Grains, so this seems to be a bit of a misnomer. There is also, in the Gard near Nîmes, the Clairette de Bellegarde appellation which is dedicated to the variety but which has shrunk to a mere 8 hectares, so one wonders about its durability.

As I said, the Clairette de Languedoc appellation is now 30 years old and concerns 120 hectares divided amongst some 11 communes, running north from Pézenas and hence a little way inland from the sea. 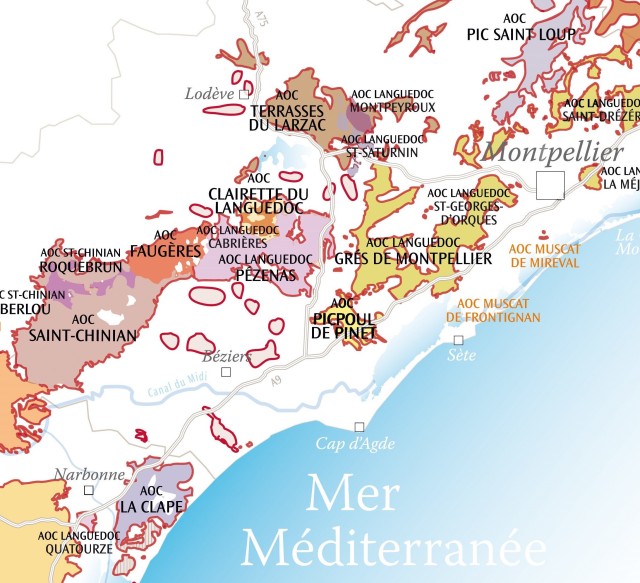 There are currently just 4 independent producers in operation, plus 4 cooperative wineries and one or two négociants such as Paul Mas. Most of the wines are dry, but there are also some examples of sweet and even rancio or fortified versions.

Elsewhere, Clairette is used, mostly in blends, by many famous producers in Southern France: amongst them are Rayas, Beaucastel and Le Vieux Donjon in Châteauneuf, Richeaume in Côtes de Provence, Domaine d’Aupilhac in the Languedoc (which we also tasted in another session on blends) and Bandol’s Mas de la Rouvière, which is a 100% Clairette. Plantings of Clairette can also be found in Italy, Australia, Lebanon, Russia and South Africa, for example. 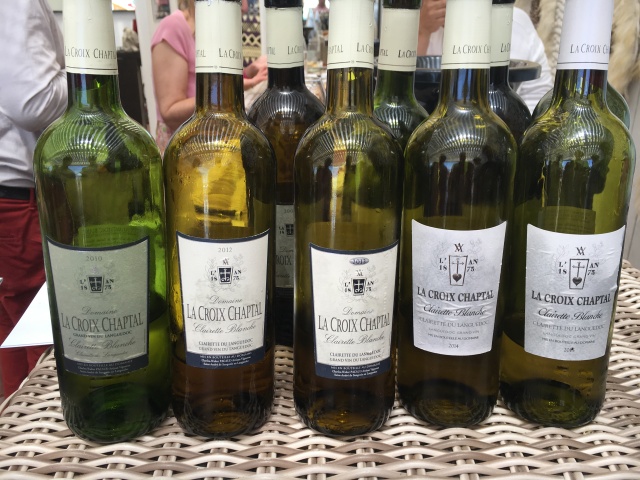 Here are some comments on the wines that I enjoyed at this tasting which must have shown a lot of the production from this appellation, including a truly magnificent vertical tasting of 10 vintages of what has to be the most interesting wine of the appellation, La Croix Chaptal.

L’Eglantier 2017 (Cave d’Adissan): tender and simple, yet attractively perfumed and with some depth of fruit. (incredible value at 3,60 euros in supermarkets in France)

Fulcrand Cabanon Blanc 2017: lovely aromatic herbal aromas such as tarragon. These persevere on the palate with an additional spicy touch and a fine edge of bitterness on the finish. Delicious and all for 6 euros!

Adissan Sec 2017: More powerful and rounded, with lighter perfumes and a touch of bitterness (4,20 euros)

Calcaire Sec 2017: Again the the soft rounded style with a hint of iodine and good length. I like the slightly bitter edge to the finish, which seems to be a feature of this cultivar (6 euros)

Paul Mas, 2017: Quite fine, savoury and rounded with a smooth texture (5 euros) 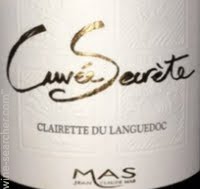 Paul Mas, Cuvée Secrète 2017: A more delicate and refined style with some liveliness to its perfumes and good length.Worth the extra 2 euros (7 euros)

Then we had what for me was the absolute star of the show: a vertical tasting of the wines of La Croix Chaptal. The prices for available vintage range between 8 and 13 euros, which is more than reasonable given the quality of these very fine wines. 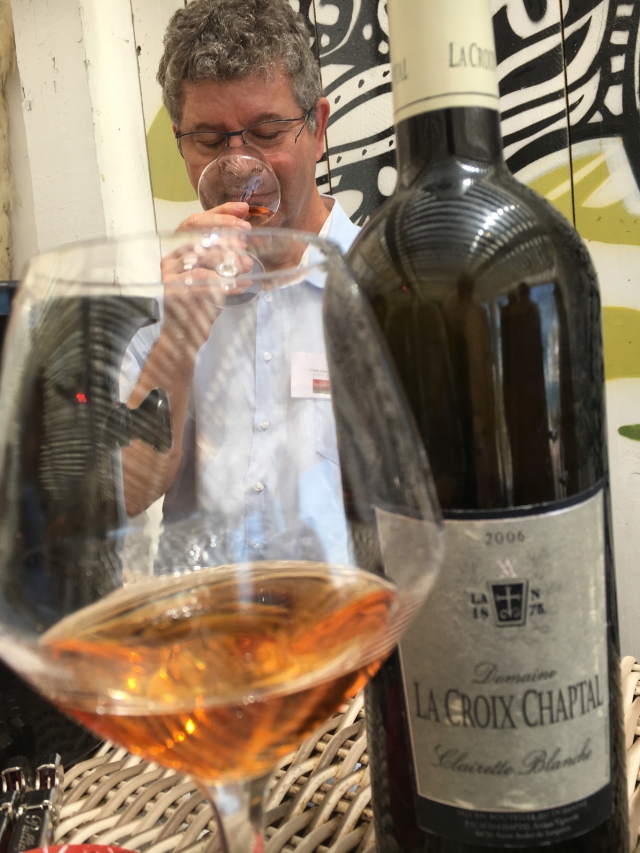 La Croix Chaptal 2016: This, like most of this flight has spent 18 months on its lees between tanks (70%) and used barrels. Very complex with pleasant oxydative character. Long and quite powerful, even slightly tannic, but never heavy. Remarkable in a very original style.

La Croix Chaptal 2015: Lighter and more delicate in its style which reflects this vintage.

La Croix Chaptal 2014: Intensity and complexity are back to the fore here. Rounder and less bitter, but one can feel the presence of the grape skins in the texture.

La Croix Chaptal 2013: Rich both in flavour and texture. Very complex and long. Held up well to a slice of strongly-flavoured spanish ham (was getting hungry after an early start and a long train ride!)

La Croix Chaptal 2012: I thought this was slightly corked. Seemed stripped of flavours, simple and out of line with the others. He did not produce any of this wine in 2011.

La Croix Chaptal 2009: A truly magnificent nose, hugely complex and fine, and ultimately moving. The texture hovers between finesse and something firmer and solid. Great length. My favourite but there were so many good ones!

La Croix Chaptal 2008: This was a hot vintage here. Always this great complexity of aromas and flavours, in a warmer register.

La Croix Chaptal 2007: A cool year, which shows in some greenish herbal aromas like tarragon and other aromatic herbs. Fine acidity and long as usual.

La Croix Chaptal 2006: one of his very last bottles of this vintage (thanks for your generosity M. Pacaud). The nose is quite extraordinary and made me travel through time backwards and also in space all around the Mediterranean with it’s rancio character. Magnificent length and complexity. We destroyed a minor masterpiece!

Well, if I was lucky enough to own a vineyard in a warm place, I am pretty sure that I would plant some Clairette !