No they don’t, because there is no such thing as a « volcanic » wine. Such simplistic catch phrases should always be avoided like the plague. But there are wines whose grapes have been produced on volcanic soils, as the recent Vinora international salon held in Clermont Ferrand, in France’s major volcanic region, showed recently. So what about these? Do they really have any clear and shared identity?

To answer this, one has to ask the following question: does this presence of volcanic residues in the soil or sub-soil give a specific flavour identity to such wines? As a corollary, I would add the question of just what proportion of volcanic residue in a soil is necessary to define the volcanic identity of these wines and what is its nature? 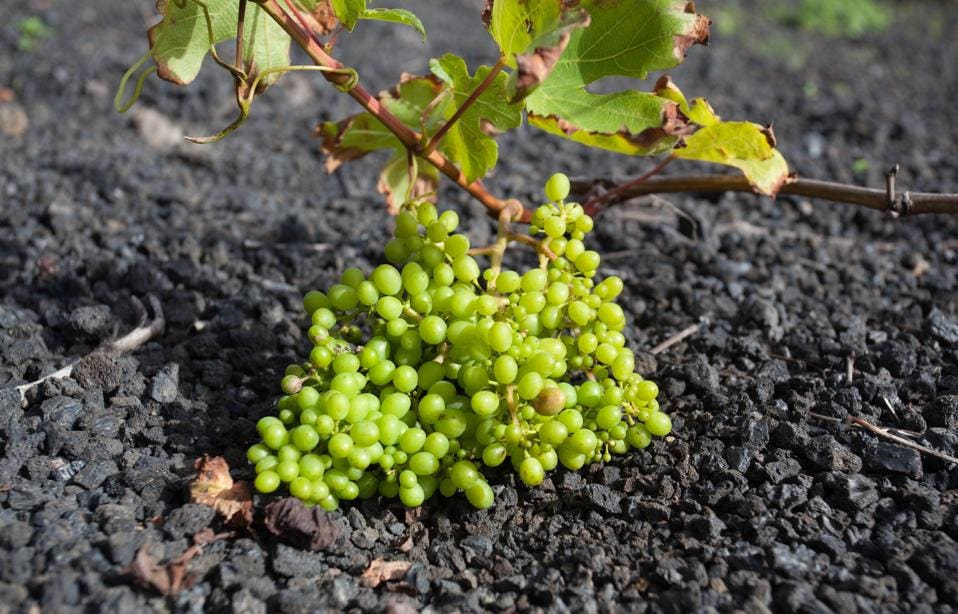 There are of course several extreme examples of vines grown on volcanic soils, as the photograph above, from Lanzarotte in the Canary Islands (Spain) shows. Other examples that spring to mind are the Azores and Madeira (Portugal), Santorini (Greece) or Etna (Italy), and there are surely others. However the vineyards that I visited in the Côtes d’Auvergne appellation that lies around the town of Clermont Ferrand and along the volcanic mountain chain of the Puy de Dôme showed nothing so obvious to the eye; yet, under the sometimes thin top  alluvial soil, there are many parts of this region that clearly lie on a volcanic base. A look at the historical buildings in the centre of the city clearly show this, with their huge blocks of black, volcanic stone that make some of them look as if they have been dusted down with coal. A detailed geological map has been made of this area (see below) and it shows just how complex and apparently haphazard the pattern of volcanic soils can be. In this case, they are not everywhere.

The soils in this area are far from uniform in their composition and also far from being purely or even slightly volcanic. There are large expanses of various types of limestone clay or alluvial soils. As the vineyards of many producers are fragmented, how does one know (supposing that one is interested by the subject) whether such and such a wine comes from volcanic soils? And, if the wine is a a blend from grapes grown on some volcanic and some non-volcanic plots, does that wine qualify for the moniker « volcanic »? This seems to me to be at the crux of the question that has to be dealt with if the producers concerned want to establish some kind of identity chart.

Although, on account of previous engagements, I was unhappily unable to attend what seems to have been a very interesting day of lectures on the subject, the next day I spoke on site to a volcanologue, Patrick Marcel, who explained that volcanic soils can be of different natures: lava, basalt, pumice or mixed volcanic scree, thus revealing just a part of the complexity of this affair. He also explained that not all volcanoes form mountains, some just erupting more quietly, sending nevertheless a mass of molten sub-soil strata, often with a mixture of many different rock types, to the surface and which then spills over a surrounding area. It is not true to say therefore that all « volcanic » wines come from mountains, as one sometimes hears.

I would also add that the wines from most of the regions that were present at the fair and which I was able to taste are made with different grape varieties and under very varied climatic conditions, not to mention the age and condition of the plant matierial or even wine-making techniques. With all the above factors in mind, how can one generalise about the impact of such soils on all these wines? I would tend to say: Mission Impossible!

I visited with Patrick Marcel and a couple of young vignerons from Domaine Miolanne a former pumice stone quarry (see above ) that borders part of their vineyard and one can see the layers formed by successive eruptions; layers which contain here and there pockets of very different soil and rock types that were thrown up and out by different eruptions. The overall colour in this instance was shades of grey, not black, so one should not expect all volcanic soils to look like those in the first photograph. Jean-Baptiste Deroche, whose vineyard this is (with his wife), explained to me that one of the caracteristics of his vineyard that lies over this volcanc residue is its free draining, which resulted, in the very dry summer of 2019, in considerable stress and a very small crop. By contrast, he said, another plot of theirs on clay and limstone produced more and better. In other words, water, its retention or rather the lack of it, would seem to be a clear element in the « identity » of volcanic soils. Perhaps this factor can go some way to explain what some describe as salinity or « minerality » in many such wines?

One authority on the matter, a Canadian journalist called John Szabo, who has investigated the subject extensively, puts forward the theory that a high levels of potassium, or iron, in the wines on volcanic soils could be what defines them. In this case, I would ask the following question: is this level of potassium or of iron, whatever it may have to be, achieved simply by the nature of the soils, or by potassium-based and/or iron-based soil amendements such as are widely used in many limestone vineyards for example?

Whatever the conclusions of on-going investigations as to what might possibly define wines grown on volcanic soils may be, I very much appreciated this initiative taken by the very small and little-known appellation Côtes d’Auvergne to take the lead in this affair and also in showing wines not only from their region, but from many other places as well. Pierre Desprats, the dynamic President of this Vinora wine fair, together with all his team, should be congratulated.

Next week I will talk about some of the wines I tasted, and in particular those from the Auvergne. And there are many good ones, all at more than reasonable prices too.