Just in case you would like to hear a track from the Miles Davis album (one of the first jazz albums that I ever bought) that inspired my title, here is Solea….

View from a small pass in the Pyrenees. The Tour de France came over here the following day.

The week before last I took my motorcyle (the one best suited to this sort of trip) on a 1700 kms trip into the vineyards of Corbières, Limoux, Roussillon and Spanish Catalonia. I rode quite a bit, often on great roads, winding up and down hills and mountains, and also along the spectacular coastline where French Catalonia merges almost imperceptibly into the Spanish side. The wind helped with the heat and I always avoided towns! On my way I also stopped to visit and taste at several wine producers. Last week I wrote about the Corbières estate of Château Haut Gléon. Now let’s move across the border. On the Spanish side I will leave out any comments about the lunacy of the Catalonian independence movement: who really needs another country in this day and age? No comments either on the stupidity and lies (they call them « fake truths », but let’s call a spade a spade) surrounding Brexit and its unscrupulous and dishonest proponents. All of this is just too depressing in an argumentative and increasingly isolationist world. No, this and the next article will concentrate on two excellent Spanish wineries that I visited during this trip.

One of these is very small (7,5 hectares) and the other is very big (about 1800 hectares in Catalonia alone as the family in question owns other vineyards, and not only in Spain). This makes for about as big a contrast as one can find in this world of wine, yet both are making quality wines that have character, and, for those who are looking for that kind of imaginary, a « sense of place ». All of which shows, once again, that size has nothing to do with quality.

This week I will start with the smaller one. I was given this contact by Marie-Louise Banyols, to whom many thanks as it was a most enjoyable meeting for me, on account of the people, the place and the wines. On my travels there and around I did notice that there is a village or small town that bears her name (Banyoles) that is very near the estate that will be the subject of this article! Sota els Angels is an estate that belongs to an Anglo-Spanish couple, and its small vineyard is entirely their creation. It is set in some wild scrub forest land (lots of cork oaks for instance) with the vines and the buildings on a plateau below the wooded hills, just south of the small town of La Bisbal d’Emporda, which itself lies between Girona and the Mediterranean coast. The wines can adopt the DO Emporda, although sometimes they choose not to do so or are rejected for some reason.

part of the main vineyard at Sota els Angels

Maria Polanco and Guy Jones decided about 20 years back to change their lives, buy a property and make wines. Many may dream about doing this kind of thing, these two did it. It took them quite a bit of searching and a lot of work, not to mention finances, but the result is just wonderful. They have made, at Sota els Angels, a place of calm and beauty (don’t angels live in paradise?), between the buildings and their carefully chosen appointments, the kitchen garden, the small swimming pool hidden in a sunken water garden and the woods that surround the whole place and its one-piece 7,5 hectare vineyard and many varietals like a protective shield. From this vineyard, using biodynamic techniques (I am not a believer here, but it is what they do and it seems to work) they produce wines that, in Guy’s words, are « drinkable for most people ». Modesty is his mantra!

My ancient GPS had some problems finding the place, but it was well worth the effort (not to mention the spectacular twisties around there that tested not only my nerves but also my tyres and brakes). As swallows and other volatiles fly around, we sit and taste in the tasting room adjacent to the winery. All around us are lined-up empty bottles of good wines that they and their frinds have tried on their travels or at home. They come mostly from Europe and from several countries. Usual suspects in many cases, but not only. I remember seeing a bottle of Dirk Niepoort’s lovely Charme from the Douro, many good Italians like Sandrone and a slew of French from all over. The scene is set.

The vineyard has evolved over the relatively short span of time since it was first planted. Bordeaux varieties and syrah, for example, are receding in favour of a higher proportion of Spanish ones and, it seems, more white than red. The winners appear to be grenache and carignan (white and red), but also picpoul and some viognier. The losers are carmenère and merlot, but also syrah. Experimentation and learning from mistakes and from what works and sells are very much part of the couple’s approach. Take the syrah for exemple. They say that here it only produces decent results one in four years. They were about to over-graft it all (the technique used when they change varieties in order to keep the established rootstock) when, last year, it produced  excellent grapes, earning itself a reprieve.

Rootstock plants waiting to be grafted up the hill in the woods. Would you say these are 4 years old?

Future plans include planting some vines on a couple of patches of cleared woodland up in the hill above. They have in fact already done the clearing and have planted rootstock in two plots. The land is so dry and poor up there that these plants are still very small and struggling, four years after being put in the ground. Guy is not sure yet when he is going to start grafting onto them. Maybe next year. Could be interesting but it will take time and a lot of work. From the current vineyard they make about nine different wines, if I counted right, so the quantities of each are very small. One has been discontinued but remains on the price list. Some of them see some wood ageing but the proportion is falling and the barrels are getting bigger. I tasted most of the current releases of these wines, and quite a few of them have some bottle ageing, which is as rare as it is good. 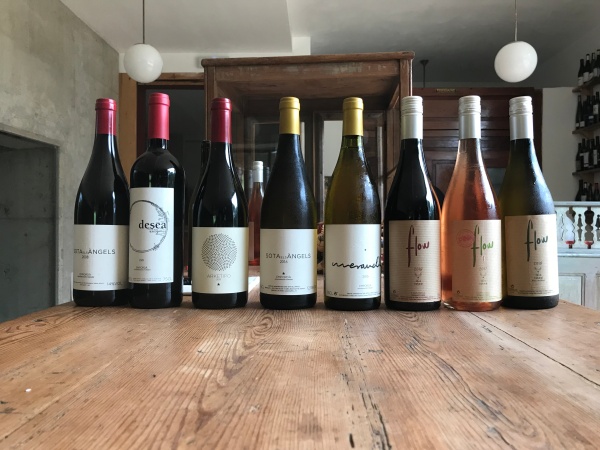 The entry level wines (on the right of this photo) are all named « Flow sea », whatever the colour, and they all use screwcaps, whih is a bold move in a local market that seems rather conservative, even if the local cork is not much good anyway.

White wines and a rosé

This was the result of a climate hasard. Hail had damaged the carignan and they decided to press carefully it and see what happened. It worked really well. I can remember having once before tasting a very good white wine made from Carignan Noir in France but cannot remember what it was called.

Very juicy fruit flavours and some colour, which always pleases me as I can see little point or pleasure in these very pale rosés that are flooding the market these days. Tangy texture through the acidity and a structure that holds well on the tongue. Good balance and length.

This unusual blend is their top white wine although a couple of others are about to be released. It worls very well and the viognier component really blends in perfectly, adding body and flavours without any of that heaviness that I so often find in wines from this variety in hot places.  It is of course richer on the palate and on the nose that the previous white, and also slightly herbal in its aromatics. The texture is good, with depth and good length. Very good.

Precensia 2017 (this was bottled in November 2018 but has not yet been released. It is made from Grenache blanc)

Long and complex with plenty of presence on the palate. It develops well in the glass but probably needs a little more time to fully come together. Neverthelss very promising.

A very different style of white which uses some skin contact and volontary oxydation. Some would call it an « orange » wine but I dislike this misleading expression. This character stands it apart and produces lots of complexity. The aromas/flavours reminded me again of aromatic plants and lemon peel. It is texturally powerful through a firm phenolic grip and has lots of length.

Fresh, fruity and a tad volatile. Dries out a bit on the finish too. Not tasting at its best apparently.

This was much better, Juicy and delicious, excellent for regular easy drinking even in the summer.

Flaours of bitter cherries and a bit dry on the finish. Again not showing well when tasted. I bought some all the same as I trust the producers that it will come around well.

Intense flavours of dark cherries. A pleasantly chewy wine that has depth and balance and is very long.

This wine, made primarily with merlot I understand, has now been discontinued. It is nonetheless a very good wine of its style, with well-rounded, somewhat oak-induced flavours and textures. Full-bodied, deep and plummy, this is a rich wine for cooler weather also.

This is not produced every year. Since the 2008, remarkably still on sale, there have just been three vintages made or under way: 2010, 2011 and 2018. Absolutely delicious wine ! Good fruit, very vibrant with a fine-tuned texture and perfect balance and length. Spontaneously gave this 16+/17 out of 20. It would be interesting to taste it blind against other comparable wines at much higher prices as it retails for under 40 euros.

Apart from other considerations, I like the fact that they give their wines time to develop before release, and this is all the more laudable in the case of a small estate that is just getting under way. I also applaud the fact that they are not tied into fixed grape varieties (or blends thereof) in theur cuvées. You can see traces of this from some of the above notes. They make the best possible wine at each stylistic level with what they get from their vines each year. A really enjoyable range with good wines of variable complexity and keeping capacity at their various price points. They may not be cheap, but they are well worth the prices asked for at every level. They are indeed very drinkable Guy!

Next week a visit to the giant Torres. A complete change of scale, but also some very good wines.